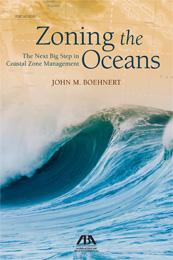 I am pleased and proud that the American Bar Association has just published my book, “Zoning the Oceans The Next Big Step in Coastal Zone Management”.

And at approximately 300 pages and 800 footnotes, and two years of work,  I am relieved to have the process behind me!

This book comes to market just as the Obama Administration is initiating its new National Ocean Policy, and coastal states are considering ways to strengthen coastal programs.

Zoning the oceans is a new and emerging area of law, and this is the first book to focus on the legal aspects of ocean zoning.

Importantly, it alerts coastal states, including states bordering on the Great Lakes, how existing provisions of laws and regulations can be used creatively to provide states with significant environmental protection as well as with significant economic development benefits.

More specifically, already existing provisions of the Coastal Zone Management Act and its extensive regulations can be exploited by states to protect their coastal environments and to foster very specific end results, such as increasing offshore alternative energy development.

Ocean zoning is in many ways similar to land based zoning, with which we are all familiar. In land based zoning, designated areas may be restricted to certain uses, such as industrial, commercial or residential, and these restrictions may, and usually do, come with numerous qualifications. The density, area, specific type of uses, even designs, setbacks, height, location and other components of facilities are often regulated. Land based zoning may also have floating zone or overlay districts, as well as provisions for special exceptions or variances to allow certain types of uses in certain areas only upon meeting certain qualifications.

Similar requirements can be established for coastal regions. That process usually starts with something called “marine spatial planning”, which sounds arcane but really means nothing more than gathering detailed information about the ecosystems in the study area, the uses that now occur in the study area, and making recommendations based on the ecology and ecosystems and current and proposed uses.

But this is far more difficult than it sounds, given we are dealing with coastal areas and open oceans, and with uses, not to mention fish and marine life, which may move through various areas at different times of the year. Often the study efforts can be extensive, expensive, and time consuming.

Additionally, the uses of the study area can at times be conflicting, which may pit interest groups against interest groups, for example, fishermen against offshore energy developers or environmentalists against oil and gas extraction industries.

Once the marine spatial planning efforts are done, the end result can be just a plan, a plan describing current conditions and uses, identifying conflicting uses or perceived harmful uses, and leaving it at that—presentation of an informed plan.

But today marine spatial planning, rightly or wrongly, is more often equated with ocean zoning, meaning the information gathered is utilized to inform and implement a regulatory structure of some sort.

That structure could look like requirements that limit or restrict certain types of uses in environmentally sensitive areas, perhaps encourage certain uses to locate in specified areas to avoid user conflicts, and perhaps designate areas which may be used for desired ends, such as offshore wind energy production.

That is precisely what happened in Rhode Island, which implemented the first federally-approved ocean zoning plan, known as the Ocean Special Area Management Plan, or Ocean SAMP. Its primary purpose was to foster offshore alternative energy development, in this case wind energy.

The Ocean SAMP designated certain areas as protected areas based on ecological and other considerations, and it sought to limit user conflicts, as for example ensuring that wind energy development would not interfere with fishing interests. An important part of the two year process involved a large stakeholders group which met regularly to be informed of the process as it was developing and to have input into the regulatory product. An indication of its success is that the fishery interests entered the process skeptical, if not opposed, and came out supportive of the Ocean SAMP.

Importantly, the Ocean SAMP study area included not just Rhode Island state waters but federal waters as well. Of course, Rhode Island could enact enforceable regulations only in its state waters. However, after the study was complete, Rhode Island utilized a special procedure under the Coastal Zone Management Act to seek to have many activities proposed in federal waters to be consistent with the enforceable policies of Rhode Island’s coastal zone management plan in order for federal permits allowing those activities to issue. Rhode Island used data gathered in the Ocean SAMP marine spatial planning process to support this successful effort.

The net result is the Rhode Island experience shows how states can use marine spatial planning and ocean zoning efforts to extend their influence over federal waters as well as the waters of other states. It is possible to design state coastal programs which will effectively provide veto authority over the issuance of federal permits to private parties seeking to conduct certain activities in federal waters or the waters of other states, if those activities are inconsistent with a state’s enforceable policies of its own coastal management program.

This is one of the key benefits of carefully and strategically using marine spatial planning and ocean zoning initiatives, and it is all fully explained and discussed in my book.

In addition, the book provides an overview and introduction to coastal zone management, including its history from colonial to modern times, a detailed discussion of coastal regulation under the Coastal Zone Management Act, and the new era of coastal zone management, involving ocean zoning efforts at the state level, as well as recent federal initiatives for a National Ocean Policy.

And there is a detailed discussion of Rhode Island’s Ocean Zoning Program, as many states, and some foreign countries, are looking at this as a possible blueprint for their own ocean zoning efforts. The book describes what Rhode Island did and how it did it, for the benefit of states which may be considering similar programs. The complete Rhode Island Ocean Special Area Management Plan Regulations are also included in the book as a CD in a pocket part.

Given the book is approximately 300 pages, these few hundred words can only summarize the material there, which incidentally also includes discussions of marine spatial planning and ocean zoning in other states as well as in Europe, which is well ahead of efforts in America, given Europe’s long interest in fostering alternative energy development both inland and offshore.

To those of you who have an interest in coastal zone management, I hope you will consider the book. Below I have attached a link to the American Bar Association Book Store where it is available.

And to those of you who suspect that book is why I have not been blogging as regularly as in the past, please go to the head of the class!