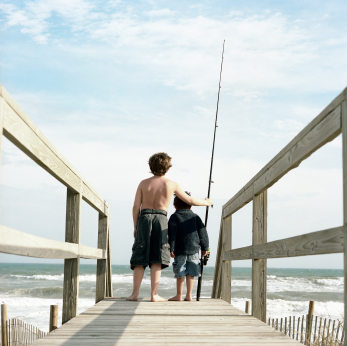 The Interagency Ocean Policy Task Force, led by the chair of the Council of Environmental Quality and composed of senior policy officials from a number of federal departments and agencies, including Interior, Commerce and Homeland Security, issued an interim report last year on planning for regulation of ocean uses.

That report raised concerns by listing “recreational fishing” as an activity which will  be “better managed” by federal planners. Interim Framework for Effective Coastal and Marine Spatial Planning.

In a state that only this year saw passage of the first law requiring a fishing license for saltwater, enacted over a Governor’s veto and to howls of protests from recreational anglers, it may be expected that Rhode Island anglers are cool to the idea of being “better managed”.

Because the Task Force is attempting to design an ecosystem management process referred to as marine spatial planning, some organizations representing recreational anglers fear the results could be a type of ocean zoning restricting recreational fishing.

The White House Council on Environment Quality recently issued a press release no doubt designed to quell this concern. In the words of the press release:

“These draft reports….do not contain a zoning plan, and they do not establish any restrictions on recreational fishing or on public access, nor make any judgments about whether one ocean activity or use is better than another…….The Task Force strongly believes in the ability of recreational fishermen and women to continue to enjoy these activities that are critical to the economic, social and cultural fabric of our country.”

Concern is such that it will take review of a final detailed Report to put fears to rest.

For several good postings discussing various facets of this issue, please review the Ocean Zone News Bog, www.thecre.com/zoning-news/, including postings on March 12 and 19th and February 13th and 28th.

And if you are truly skeptical after reading these postings, you may want to throw those lines in the water before the “Ocean Gendarmes”  confiscate your rods and reels, or throw you in the lock-up for fishing in the wrong place, or with the wrong equipment, or at the wrong time, or…………….!

In a recent talk to a regional conference of planners held in Connecticut, that…

A Comprehensive Conference on Offshore Energy Development: Get Current and Get Connected