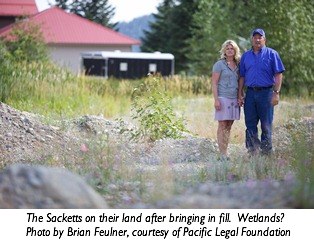 Michael and Chantell Sackett bought a house lot near Priest Lake, Utah, intending to build their family home. In doing so, they did due diligence inspections to ensure the lot was buildable. They saw no red flags.

What they did not do was engage a wetlands biologist to examine the lot to determine if it was a wetland. Perhaps it never occurred to them, as the lot was dry. Yes, dry, as in no visible water.

The Sacketts applied for and received local permits and began their building process by bringing in dirt and stone to level the lot and prepare it for construction. That was when they received a Compliance Order from the Environmental Protection Agency, in essence telling them they had just “filled”  “waters of the United States”. The EPA ordered them to cease construction activity, to remove the dirt and fill material, to plant vegetation, and to monitor the property for three years, during which the property could not be used. Of course, by implication there were being forbidden to ever build a house on the land they purchased for the purpose of building a house, in a neighborhood with other houses .

And the order had teeth. The Sacketts could be subject to substantial fines as well as possible jail time for failure to comply. For example, fines of $37,500 per day of violation of the Clean Water Act were possible, and these could be doubled to $75,000 per day for failure to comply with the Compliance Order. One month’s fines, at just $25,000 per day would be $750,000 and a year’s fines at that level would be $9,000,000.

Unfortunately for the Sacketts, wetlands are determined on the basis of a number of factors, including subsurface hydrology and vegetation, and what looks dry may actually be wetlands. In fact, wetlands may be characterized by certain types of vegetation, and by subsurface water near the surface for only a couple of weeks of the growing season, and not visible on the surface.

Identifying a swamp is easy, but identifying a “dry” wetland takes professional help. I am told by an old environmental hand, Dave Westcott, of Mason & Associates in North Scituate, Rhode Island, that young biologists are sometimes  taught a rhyme to help them determine what is wetlands vegetation:

Sedges have edges
and rushes are round
and grasses have joints
where they grow from the ground.

When the Sacketts tried to convince the EPA that in fact their land was not a wetland, the EPA wasn’t particularly interested. From its perspective, its Compliance Order was in effect, and the Sacketts had no ability to even question EPA jurisdiction.

Now, how many average property owners could effectively cope with this, and defend themselves against the overwhelming weight of the United States Government?   Not many, of course.

“The EPA used bullying and threats of terrifying fines, and has made our life hell for the past five years”, Sackett was quoted in the Los Angeles Times as saying. Well, that is not exactly a glowing citizen tribute of a federal agency.

That was not a victory on the merits, however. It was simply, but importantly, a victory which allowed the Sacketts to question in a court of law the jurisdiction of the EPA to regulate their land—in this case for the Sacketts to argue, inter alia, that their land was not in fact “wetlands” and therefore not “waters of the United States”, implicating jurisdiction under the Clean Water Act.

This is important,  because the EPA issues between 1,500 and 3,000 Compliance Orders in a year, and now the recipients of those orders have the ability to challenge the EPA’s jurisdiction before being crushed by the weight of the potential fines.

So the Sacketts are back in Court. Thankfully, they are still represented by their pro bono lawyers, the Pacific Legal Foundation.

A Wetlands Story From  Rhode Island

Here is yet another example, this time closer to home, of the disastrous consequences of unknowingly buying property with wetlands.

A couple was interested in purchasing a lot in Little Compton, Rhode Island to build a house. They bought the property only after being assured permits would issue for construction, including a permit from the Department of Environmental Management for installation of an individual sewage disposal system (“ISDS”). They bought the lot and installed a foundation and part of the ISDS system pursuant to their local building permit and the permit issued by the Department of Environmental Management.

Incredibly, the Department of Environmental Management then issued them a violation for constructing their foundation and ISDS system in wetlands. Yes, the same Department that issued them the ISDS permit in the first place, allowing them to construct.

It gets worse; DEM then ordered them to remove the foundation and the rest of their construction, which they eventually did after an unsuccessful court battle.

Some years later, after they had spent tens of thousands of dollars and over a decade trying unsuccessfully to build on their property, my former firm undertook representation of them and was able to procure permits to develop the property, but this also involved another trip to court. Williams  v. Coastal Resources Management Council, C.A. No. 08-2188 (Super. Ct.)(RI July 30, 2009).

What are the lessons of this for those seeking to purchase property?

1) If you intend to do any construction work, even just construction of a new house, or building an additional structure on already developed property, it would be prudent to have a wetlands biologist visit the site before you buy to make sure you are not buying wetlands, or if you are, that you can nevertheless proceed with your construction plans.

2) Do not assume that because a building official will issue a permit for construction, there are no wetlands on the property. There may well be. Just ask the Sacketts!

3) And do not assume that because the property looks dry, it is not wetlands. It may well be.

Finally, not to be outdone by Mr. Westcott, I submit my own rhyme.

I Got Those EPA Black and Blues

Off I went to buy some property
To raise my family properly.
All of my money I would use,
For on a house, who could lose?

I looked at land that to my eye
Could only be considered dry,
So I signed on the bottom line
In order to build that house of mine.

That’s when I got a note in the mail
From the EPA, threatening jail.
Stop building on wetlands, they said.
That land’s for critters, not a homestead.

It’s a mistake I said, a teenie weenie,
Why, this land’s dry as a martini.
There is no water to be found,
Not enough for a flea to drown.

You may think so, they replied
But underground water we spied.
That means it’s wet, even if dry,
So pay your fines or you will fry.

It was quite some time ago,
When all the Courts told me “No”!
But the EPA has since become my friend,
Letting me visit my land on the weekend.

If you think owning or buying a gasoline service station is easy, think again.…