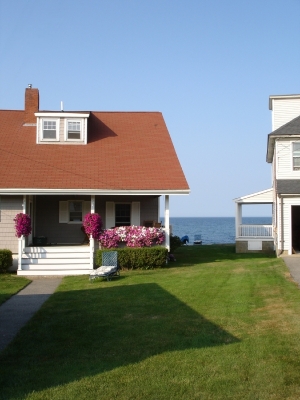 If you own waterfront property in Rhode Island and think you can do with it what you will, so long as you observe zoning ordinances like everyone else, think again.

Staying out of Jail

By way of example, some years back one of my law partners came to me with a problem—he had been served with a violation and penalty from the CRMC for “improving” his water view by removing some phragmites and other vegetation. Could I help, he asked?

After ascertaining more of the facts, I said he had a problem, but at least he hadn’t hired a bulldozer to tear up the coastline. There was a long pause and then he said, “Well, I did rent a Bobcat”.

I said I could probably keep his wife out of jail but he had better pack his toothbrush!

Of course, no one went to jail, but he did pay a fine, and the last I heard CRMC was discussing restoration of wetlands with him.

Now, if a lawyer who should know better can get himself into this kind of trouble, you can imagine what else may be going on along our coastline.

Here is the reality:

If you own waterfront property, you are subject to increased regulations which can be stringent and may control everything from whether you can have a dock to where you can build a patio to what bushes or trees you could prune or remove.

If the CRMC buffer regulations apply to your property, there is little you can do in the buffer area without getting CRMC permission. (RICRMP Section 150. Coastal Buffer Zones)  The buffer regulations typically apply to new residential development (for example, the construction of a house on a vacant lot), commercial and industrial development, energy related activities and certain public infrastructure.

Assuming say, a 75 foot buffer zone from the most inland edge of the tidal feature on a property, the property owner would be prevented from altering this buffer in anyway, except in compliance with the regulations. The following would generally apply in a buffer zone:

The purpose of the buffer zones is to protect water quality, coastal habitat, scenic and aesthetic quality, historic and archaeological resources and to foster erosion control and flood control.

Given these protections, the regulations for buffer areas are stringent.

For example, pathways which provide access to the shoreline “are normally considered permissible” provided they are less than or equal to six feet wide and follow a winding path that minimizes erosion.

And if you want to actually see the water, from your new house, “selective tree removal and pruning and thinning of natural vegetation may be allowed within a defined corridor in order to promote a view of the shoreline” but “only the minimal alteration of vegetation necessary to obtain a view shall be acceptable to the Council”.

And if you actually want to enjoy that waterfront, well, “minor alterations of buffer zones may be permitted along the shoreline if they are determined to be consistent with the Council’s requirements. These alterations may include maintaining a small clearing along the shore for picnic tables, benches, and recreational craft (e.g. dinghies, canoes, day sailboats, etc.). Additionally, the CRMC may allow small, non-habitable structures including storage sheds, boat houses and gazebos…..where appropriate.”

Note the repeated use of the word “may”. The regulations give CRMC a good deal of discretion to protect the values served by buffer zones.

More specifically, if you expand the square footage of the foundations of your structures on your property by more than 50%, you would be subject to the buffer zone requirements. The regulations are a bit complicated in this area, so this requires some attention.

When considering expansion, weigh the benefits of the increased structure you want against the restrictions of imposing the buffer regulations on your property, and determine what is more important to you.

And for all of you who thought your house was your castle, well it is, but if that castle is waterfront property, you may be the lord but not necessarily the master of all you survey!