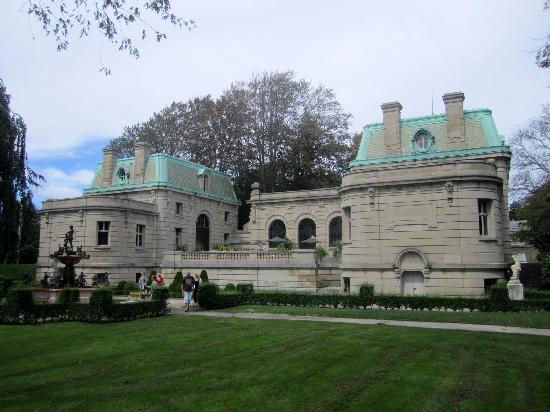 Our Rhode Island Supreme Court recently issued an important decision for property rights, even though property rights were never mentioned in the decision.

This dispute involved opposition to serving food in two historic mansions, the Elms Carriage House and the Marble House Chinese Tea House.  The food would be pre-wrapped and prepared off-site.

Challenge came before the Newport City Council upon the Society’s application for a “Victualing License”, granting the right to serve food.

Opponents argued that the zoning ordinance prohibits such food service, as it is not a listed accessory use for a museum. The Society said this argument raised a zoning issue and the Council had no jurisdiction to consider zoning issues on the application, only health and safety issues.

And the Zoning Officer, in consultation with the City Solicitor, found that there was no conflict with the Zoning Ordinance.

The zoning officer further advised the Council was not authorized to decide zoning matters.

And the Council should not have missed the point because the zoning officer was not subtle and he was not circumspect.

As quoted by the Supreme Court, he said:

“What you are doing is actually illegal under your own ordinance.  Again, you established
a [zoning officer]…who interprets the code and renders a decision. Under state law and
under our zoning code, if a person isn’t happy with that, a certain person is able to appeal
to a certain body. [The Council] is not that body.”

In case the point was missed, the zoning officer reiterated:

“Again,…you’re getting into the [zoning] issues that aren’t to be dealt with here before the
City Council.  I mean, if you want to, as a private citizen, file an appeal of my approval of
[the instant applications], then we’ll take it to the Zoning Board.  This is the proper forum
where we can argue these points.”

The license was denied by a 4-3 vote, and the issue was subsequently before our Supreme Court.

The Supreme Court did indicate that health and safety was “required to be the focus” and that zoning issues were “a detour”.

However, the Court reversed the Council decision because it “failed to provide factual findings and legal grounds to support its decision”.

And therein lies the property rights issue.  Our Supreme Court reiterated that “municipal councils and boards acting in a quasi-judicial capacity must make findings of fact and conclusions of law to support their decisions”.

The reason the Court insists on this is for the purpose of “facilitating judicial review, avoiding judicial usurpation of administrative functions, assuring more careful administrative consideration, helping parties plan their cases for rehearings and judicial review, and keeping agencies within their jurisdiction.” Quoting Cullen v. Town Council of Lincoln, 850 A.2d 900, 904 (RI 2004).

Most council and local board decisions deal in some form with property rights issues, whether they be requests for zoning variances or other uses of property.

The failure to insist on such findings and conclusions in decision-making results in property owners never knowing why relief was denied, and more importantly, it allows councils and boards to avoid the rigor of insuring that their decisions fit within the law.  This is the importance of “keeping agencies within their jurisdiction”.

In the Newport case, if the Council had to make that analysis to reach its decision, it is possible it would have reached a different outcome.

The Court in this case was not making new law but rather was insisting that existing precedent, sometimes more honored in the breach than the observance, be followed.

There is a reason that the last bastion of defense for property rights is our court system.

*A shorter version of the article was recently published in the Providence Business News.