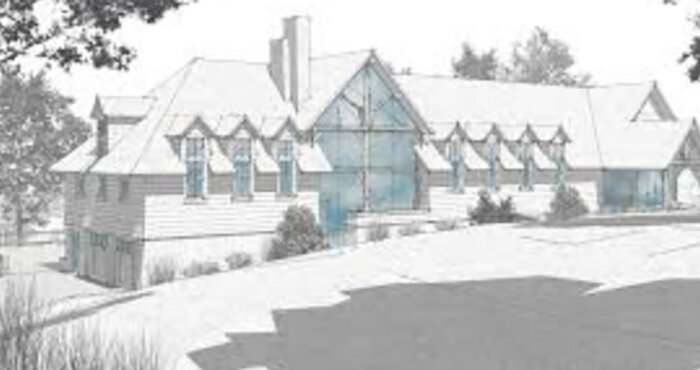 In an important decision, the Rhode Island Supreme Court has set clear guidelines for approving and adjudicating disputes between the state and municipalities regarding the state’s obligation to comply with local zoning ordinances and comprehensive plans. Town of Exeter v. State of Rhode Island, No. 2028-274-Appeal (PC17-1594)

The dispute involved the Rhode Island Department of Environmental Management (“DEM”), which sought to develop a project in part in Exeter and in part in Richmond.  At issue was the proposed construction of the Arcadia Natural Resources and Visitors Center (pictured above), providing office and laboratory space for DEM and certain public space.  The building was to be located in Richmond and the parking lot, driveway and wastewater treatment system serving the building were to be located in Exeter.

While DEM officials met with Richmond to explain the project, DEM took the position that despite the requirements of the local zoning regulations, DEM would not be making any changes in its proposed development.

Both towns eventually sued, asserting that the State was required to comply with development plan review, planning board and zoning board approvals and other permitting requirements.  One lower court hearing justice found the State was immune from municipal zoning ordinances and a seconding hearing justice found that the State was not required to seek municipal approvals.  That second justice also found that the statute governing the dispute was the Comprehensive Planning and Land Use Regulation Act, R.I. Gen. Laws 45-22.2 -1 et. seq. (the “Planning Act”)

Our State Supreme Court disagreed, and outlined a detailed process for the state’s pursuit of development projects in municipalities.

On appeal, the State’s argument before the high court was that the Planning Act governed the resolution of all land use disputes between the state and a municipality, including zoning disputes.

The State argued it prevailed under the Planning Act because neither community at the time had a comprehensive community plan in place.

The municipalities argued that zoning disputes between the state and its municipalities must be decided under the Rhode Island Supreme Court’s decision in Blackstone Park Improvement Association v. State Board of Standards and Appeals, 484 A.2d 1233 (RI 1982), which set up a balancing of interests test to determine in each particular case whether the State would be immune from the municipal zoning ordinance.  One of the questions was whether the Planning Act, enacted after the Blackstone case, was intended by the legislature to address not only disputes under municipal comprehensive plans but also disputes under zoning ordinances.

The Supreme Court reaffirmed the applicability of Blackstone to state/municipal zoning disputes, stating that the Planning Act was intended to deal with disputes under comprehensive plans but not as to zoning matters.

Accordingly, as to zoning disputes, under the Blackstone balancing test a court must weigh (i) the nature and scope of the instrumentality seeking immunity, (ii) the kind of function or land use involved, (iii) the extent of the public interest to be served, (iv) the effect local land-use regulation would have upon the enterprise concerned, and (v) the impact upon legitimate local interests. Based on this evaluation, the court would determine if the State was immune from the local zoning ordinance.

Based on this analysis, these are the steps the Court has laid out when the State proposes a development project in a municipality:

The Court has gone a long way in clarifying how the state and municipalities are to address disputes under both comprehensive plans and zoning ordinances, and for that reason it is an important decision.

Is “Right to Dry” Wrong to Try?

With near double digit national unemployment, the collapse of the housing market throughout the…