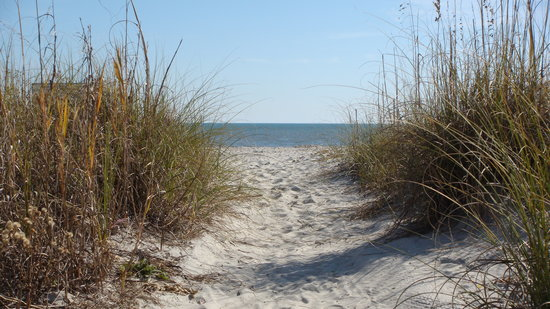 The only certain answer to this question is that some people will say “yes” and others will say “no”, for the simple reason that disputes over rights-of-way are ubiquitous.  And to have a dispute, you need opposing points of view.

These disputes can get acrimonious, and more so when you are dealing with shore access rights, it seems.  In fact, more often than not I see these disputes arise in the context of coastal property or other waterfront access.

The simplest rights-of-way, and what should be the most certain, are those arising from a recorded instrument, whether granted in a deed by the grantor to the grantee, reserved to the grantor in a deed to a grantee, or granted by easement.

I say these should be the most certain, as there is actual grant or reservation language to rely on.  However, drafting skills vary, intentions may not be clearly expressed, or restrictions or rights clearly stated.  Given these vagaries, disputes under written instruments often arise.

For instance, has the right been abandoned or lost from non-use? Is the right granted years ago enforceable today given municipal or state regulations?  Has the right been extinguished under law by the actions of a third party?  Are there express or implied restrictions in the grant which limit its use?

These disputes often lead to litigation, although in my experience most should be resolvable without litigation by good faith negotiations, trying to recognize and understand the intent of the parties and the meaning of the instrument.

Rights Arising Outside of Grants

More difficult are rights claimed or asserted to have arisen by historical factual circumstances impacting the chain of title of the properties in question.  These are “off record” rights, meaning that they are not expressly granted by a written instrument in the land evidence records.

Under Rhode Island law, these off-record rights may arise in two primary ways, by implication or by prescription.

First, easement or rights-of-way may arise by implication.  Essentially, an implied easement arises from the expectation that when a grantor conveys property, the grantor includes or intends to include in the conveyance whatever is necessary or attendant to the use and enjoyment of the property either conveyed or retained.

There are several types of these easements by implication.

Quasi Easements.  A quasi-easement is an easement arising from a pre-existing use or condition pertaining to the properties at issue and is an implied grant based on the presumption of the parties at issue.  For example, if at the time of sale, the parcel being sold had the benefit of an access way across the remaining parcel retained by the seller, it is presumed the parties intended that this access way would continue to be used for the benefit of the property being sold.

Easement by Reference to a Plat.  This easement by implication arises when a lot is platted on a subdivision plat which shows rights-of-way for the benefit of the lot owners.  The argument is that the owner of the plat created certain lots and roads or ways, and these roads or ways were intended to benefit the lots created and to be sold, and this is indicated by virtue of the conveyance of the lot(s) with specific reference to the plat.   In some cases, the plat notes will specifically state that the ways shown are for the benefit of the lot owners.

The next category of off-record rights-of-way or easements arise by virtue of action taken over not less than a ten-year period under Rhode Island law, which actions are taken by a third party and are contrary to the ownership interests of the parcel owner.  This is akin to adverse possession, where someone can acquire title in the property of another by using that property for ten years or more in a manner contrary to the rights of the owner, and without permission of the owner.

In essence, to find a prescriptive easement, someone must use the property of another in an actual, open, notorious, hostile, continuous and exclusive manner for a period of ten years.

By ways of example, someone clears an area on the property of another to create a road in order reach their property for the cutting of trees and the removal of firewood. If such person uses such created road for ten years in an open, hostile, notorious and exclusive manner, they may well be a position to successfully claim a prescriptive easement in the roadway.

It should be understood that these cases tend to be very fact specific, that the facts can vary widely, and that the facts will in large measure shape the legal determination of whether an easement exists or does not exist, as well as the scope of whatever easement is found to exist.  That being said, it should also be understood that this is a somewhat complicated body of law which does not yield easily to neat summaries.

While someone claiming rights under a written and recorded deed or other instrument may be compelled to sue in court to confirm his or her rights, if a negotiated resolution was not possible, in doing so they would only have to meet the ordinary burden of proof, proof by a fair preponderance of the evidence, meaning that the plaintiff’s claim is more probably true than not.

However, in seeking to acquire property rights other than through a written instrument, as by adverse possession or by prescription, one is held to a higher standard of proof, requiring that the plaintiff demonstrate his claim by clear and convincing evidence.

Additionally, claimed rights under easements by implication or prescriptive easements do not exist until they are adjudicated by a court, as they are not based on written instruments but rather on facts which must be established by a judicial determination following an evidentiary hearing.

Despite that, in many instances such claims are also susceptible to negotiated resolution if the parties are willing to reach a consensual agreement as to the matters in dispute.

In my experience, this is often a much more cost-effective and time-efficient way to resolve the dispute, and it has the benefit of being something both parties accept, even if neither is thrilled by the result.  This stands in contrast to court proceedings, where the result is uncertain, and it is possible it will be something that neither party likes very much.

However, given the number of reported judicial cases on such right-of-way and easement disputes, it appears that all too often the parties are willing to litigate whether that right-of-way is wrong!

If you think that Tattoos and Free Speech have nothing in common, then you are…

Why Isn’t That Easement On My Survey?

Real estate investors, developers, and even residential property owners who want to know specifically what…