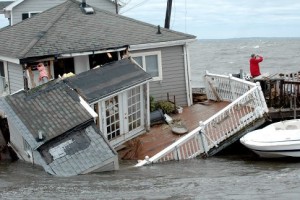 Given it is Hurricane Season, it is appropriate to ask whether Rhode Islanders are any safer from a hurricane today than they were three years ago when Hurricane Sandy hit.

The answer is probably “somewhat safer”, given the efforts of federal, state and local governments at public education and hazard mitigation.

But three years is not a lot of time, and significant change takes time.

However, perhaps there are some simple things that can be done.

One may be to require municipalities to allow those building in flood hazard areas to claim an extra margin of safety if they so choose.

For example, currently the State Building Code requires 1 foot of “freeboard”, being the minimum distance above base flood elevation that the lowest floor of a structure, or the lowest horizontal structural members, may be built.

Base flood elevation is measured by the flood level expected in a severe storm, known as a 100-year-flood.

There have been efforts to require a greater freeboard, such as two feet.  This has been opposed by some because it is unnecessary, or would block neighbor’s water views, or make access difficult for the elderly.

One person who has given this issue a lot of thought is Coastal Resources Management Council Executive Director Grover Fugate.

He notes that the highest sea level rise projected for Rhode Island by the federal government is over one foot in 20 years. That is the highest projection, and it may not prove true. But if it does, if you built a house today only one foot above the base flood elevation, twenty years into a 30 year mortgage, you would be below base flood elevation and subject to higher flood insurance rates.

That may make the house unaffordable for the current owners, and it may mean that when it is put on the market for sale, its purchase price may be reduced by tens of thousands of dollars.

Either would be disastrous for the average family.

Some municipalities allow homeowners to elevate their existing home, or build their new home, several feet above the base flood elevation.

Rather than requiring elevated construction, perhaps the General Assembly could require all municipalities to allow home owners who so choose to elevate or construct their home up to five feet above base flood elevation.

Another thought is to make low interest or no interest state or federal funding available for those who want to undertake elevating existing homes to move out of, or further out of, the flood zone. Some federal money is being used for this now in Rhode Island.

Both approaches avoid a government mandate and put the decision on the property owner.  Presumably, armed with the facts, those building new homes will opt for an increased margin of safety, and those with existing homes at risk will consider elevating their current home for increased protection.

Supporters of elevating buildings argue this keeps properties on the tax rolls, reduces storm damage, and benefits the construction industry.

And if it is voluntary, it shouldn’t create a tidal wave of new regulations!

*A shorter version of this article was published in the Providence Business News.

John M. Boehnert practices real estate and environmental law in Providence.  His book, Zoning the Oceans, was published by the American Bar Association.

Is that Right-of-Way Wrong?