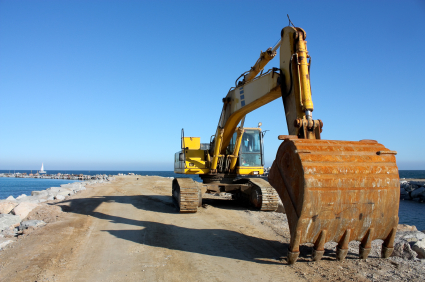 Excavator at a construction site on the coast of Barcelona.

I recently had the opportunity to address the fall meeting of the American Bar Association’s Section of State and Local Government Law on a coastal permitting topic that even some federal regulators admit generates misunderstanding.

That topic was protections available to states from activities which could impact a state’s coastal zone management program if such activities require a federal permit.

More specifically, the panel which I moderated was asked to address issues involved in the siting of potentially hazardous facilities, with particular reference to the efforts of Weaver’s Cove Energy LLC to site a liquefied natural gas terminal in southern New England.

(By way of disclosure, I represented Weaver’s Cove Energy in its filing with the Rhode Island Coastal Resources Management Council under the Coastal  Zone Management Act in regard to activities it proposed to conduct in Rhode Island waters, primarily dredging.)

I don’t want to go into that topic in detail, given that I am preparing an article on the federal consistency program under the Coastal Zone Management Act for submission to the Rhode Island Bar Journal. However, I do want to highlight several important considerations, including common misunderstandings, regarding protections that may be afforded states from perceived threats to their coastal zone management program.

Congress enacted the Coastal Zone Management Act in 1972, 16 U.S.C. 1451 et seq., to help facilitate States in protecting their coastal environment, given the increasing pressures for development along the coast. Participation in the program is voluntary, and an important inducement to coastal states to participate is the federal consistency program, pursuant to which states could get something of a veto over the activities of developers and others which require federal permits and which could impact their coastal environment.

That inducement was successful, as today all eligible states participate in the program.

In order to participate in the program, states must develop a detailed regulatory structure to protect and enhance their coastal environment, which program is subject to approval by federal regulators.

Under the federal consistency program, if an entity is seeking a federal permit for an activity that may affect any land or water use or natural resource of the state’s coastal zone, the state has the opportunity to review these activities to determine whether they are consistent with the enforceable policies of the state’s coastal  management program.

This is an effective veto by a state of activity requiring a federal permit and is therefore a very important weapon which a state participating in a coastal zone program has the opportunity to wield. But many areas of misunderstandings or confusion can arise in this regard, given that the federal consistency program is extremely nuanced.

First, although the federal consistency program applies to federal agencies which may be seeking federal permits, as well as to non-federal entities, states have far less protection when the action is proposed to be undertaken by a federal entity.

For example, a non-federal permit applicant must be fully consistent with the enforceable policies of a State’s coastal management program, while a federal agency must only be consistent “to the maximum extent practicable”.

Additionally, if a federal entity disagrees with a state’s finding that the proposed activity is inconsistent with the state’s coastal management program, the federal entity may nevertheless proceed with the activity under the federal permit. The state is left with what may be unpalatable options. One is seeking mediation by the Secretary of Commerce, and another is litigation.

Thus, although Federal entities are subject to the federal consistency program, it would be a mistake to assume that they are treated like any other entity seeking a federal permit.

Secondly, even if the state makes a determination that the non-federal actor’s proposed activity is inconsistent with the enforceable policies of the state’s coastal  program, the Secretary of Commerce can override this decision by finding that such activities are in fact consistent with the State’s coastal program, or by finding that the activity is necessary in the interests of national security.

Accordingly, when dealing with the federal consistency program under the Coastal Zone Management Act, one should not necessarily expect consistency.

Will Recreational Fishing in the Ocean State Be “The One That Got Away?”

Given that Rhode Island is the Ocean State, and recreational fishing is extremely popular,…

Is that Right-of-Way Wrong?