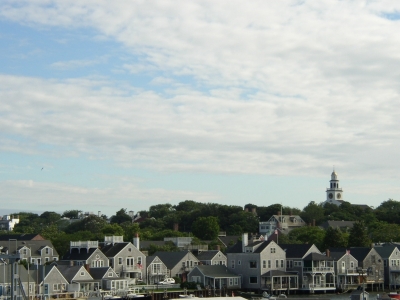 In Massachusetts the scales are tipped decisively in favor of public rights while in Rhode Island the scales are more evenly balanced, at least where filled tidal land is at issue.

Filled tidal land is land created by the placement of fill below mean high tide. Much of this filling is historic, before the advent of modern day regulation of the shoreline. For example, in Rhode Island such filling proliferated in the 18th and 19th century, and even earlier. Much of downtown Providence and areas along Narragansett Bay and the Providence River are filled tidal land, as are areas along the waterfront on Acquidnick Island, particularly in Newport.

And the filling of Back Bay, the home of Fenway Park, was completed in the late 19th century.

In Arno v. Commonwealth, the plaintiff Joseph Arno, the owner of filled tidal land in Nantucket, sought to uphold two lower court rulings, one from the Land Court and one from the Superior Court, that found that despite the arguments of the Commonwealth, certain of Arno’s land was not encumbered with requirements allowing certain public rights on the land under the Waterways Act, by virtue of its having been filled tidal land.

The procedural history of the case is complicated, as are the facts, given disagreement over what high water line was at issue and disagreement over the impact of the Attorney General’s involvement in the case in 1922 on behalf of the Commonwealth. (For help in sorting this out, see the excellent brief submitted on behalf of Mr. Arno by Gordon M. Orloff, Esq. and Gareth I. Orsmond of Rackemann, Sawyer & Brewster, P.C.)

The lower courts found that the process of registering the land under the Registration Act demonstrated that no conditions subsequent were imposed on the filled tidal land under the Waterways Act. The high court disagreed, holding that only the legislature, and not the attorney general or the land court,  could release any restrictions under the public trust doctrine which benefited the public, and the legislature had not done so.

The public trust doctrine differs from state to state but generally imposes restrictions on land below mean high tide for the benefit of the public, in Rhode Island for the purposes of fisheries, commerce and navigation and in Massachusetts for public purposes including  navigation, fishing, and fowling.

In Massachusetts these restrictions for the benefit of the public have generally been found to apply to filled tidal land, as the Arno case demonstrated.

And the restrictions were not minor in nature. For example, under the license that Arno required to develop these filled tidal lands, most of the proposed facility’s ground floor was required to be a “facility of public accommodation” with public restrooms, and public easements allowing passage for any lawful public purpose. That would certainly be considered an intrusive infringement on “private property” rights.

Rhode Island has chosen another course. While the State of Rhode Island argued in a 1995 case that only the legislature can extinguish public trust rights in filled tidal land, and must do so by a deed or an equivalent action, the Rhode Island Supreme Court rejected this approach. Greater ProvidenceChamber of Commerce v. State, 657 A.2d 1038 (R.I. 1995). (See my blog postings of July 3, 2010 and July 24, 2010 below for further discussions on the Rhode Island experience.)

The Rhode Island Supreme Court rejected this approach because it recognized that historically there had been a great deal of filling along the coast, and that much of this was for the benefit of commerce and navigation, such as piers, warehouses, factories, etc. It recognized that this was done in good faith by riparian landowners, exercising clearly-recognized riparian rights, it was often done at considerable expense, and it was often a type of “private” public works projects”, as they were building infrastructure to support commerce.

But the Rhode Island Supreme Court also looked to judicial precedent and found decisions in the 19thcentury supporting the view that when land is created by placing fill below mean high tide, the public trust rights are extinguished in the filled land but the public rights remain in the “new” shoreline. See for example  Allen v. Allen, 32 R.I. 166 (1895).  In other words, the public did not lose its rights to the shoreline, but these rights were necessarily moved seaward.

In essence, the Rhode Island Supreme Court, both in the 19th century and in the 20th century, was balancing private property riparian rights with public trust rights. In doing so, Rhode Island’s high court brought more certainty to property rights.

The Essence of Property Law

And as my real property law professor bellowed in opening his lecture in my first law school class on the first day of law school:

As my professor went on to explain, private property ownership is central to our free enterprise system, and it is absolutely essential  that property owners and prospective purchasers know and understand precisely what rights they have and do not have with regard to their property.

One would think Mr. Arno is no exception. After all, he bought land whose title was registered in the Land Court in 1922, after the involvement of the Attorney General on behalf of the Commonwealth. He certainly thought his land was free of the significant encumbrances urged by the Department of Environmental Protection for the benefit of the public, and two lower courts took the same view.

So much for certainty!

Riparian Rights in Little Rhody and Beyond

Rhode Island is the Ocean State, and if anyone doubts the interest of Rhode…