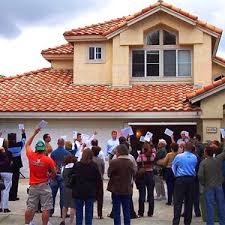 The implosion of the residential real estate market has forced sellers across the country to rethink how they market real estate in a down, if not devastated, market. Increasingly, the answer is to turn to auctioneers.

In the conventional model, sellers engage a real estate broker to advertise and market their property. Although marketing is done through the mass media, such as newspapers, the selling is often done one-on-one, through appointments with interested buyers or periodic “open houses”. In a brisk market, this can result in multiple offers on desirable properties. But in a depressed market, properties can linger for months, and even years.

Enter the auctioneer, who specializes in “accelerated marketing”, bringing numerous interested buyers together at one time to bid on a property. The result is that a property can be marketed and sold in a period of weeks, rather than months. Of course, the key question is “for how much”.

Many claim absolute auctions draw the highest bidder participation because of the possibility of getting a true bargain. This also generates excitement. The excitement and the higher participation can give the seller an advantage, and perhaps a higher price than may otherwise have been obtained.

Others claim the risk of a property selling far below fair market value outweighs the potential benefits of an absolute auction.

If a property is encumbered by a mortgage, the seller will likely need the lender’s consent to sell the property at an absolute auction.

The second type of auction is the disclosed “minimum bid” auction, in which the auctioneer starts the bidding at a predetermined price. While this does not ensure the property will sell at that price, as no bidder may elect to bid the minimum, it does ensure that if the property sells, the seller will get a predetermined and presumably acceptable amount, after the expenses of the sale have been deducted.

The third type of auction is the “reserve” auction, where the seller reserves the right to accept, reject or counter the highest bid. This gives the seller maximum flexibility but may be less likely to attract a wide range of bidders.

In recent years auctions have become increasingly popular with sellers of luxury homes as well as with owners of condominium projects.

The sale of luxury single family homes appears well-suited to the auction approach; although these homes carry price tags only a few buyers can afford, those limited buyers have the resources to close the sale.

In an October auction in a North Carolina second home enclave, a $4.8 million house sold at auction for $2.6 million. It was seen as a great deal for the successful bidder but also good for the seller, who had marketed the house unsuccessfully for 15 months before turning to an auctioneer.

According to the auctioneer, “we put a spotlight on the property and create urgency among buyers”.

Rhode Island has seen luxury auctions as well. Lila Delman Real Estate, which focuses on high end properties, offers an online auction service and auctioned Newport’s Wrentham House with an opening bid of $6.5 million. The property sold at a private sale likely motivated by the auction for close to its proposed opening bid, according to broker John Hodnett. And a Watch Hill mansion, Treasure Hill, sold at auction in 2007 for a reported $5.5. million.

More recently, an attempted auction of Watch Hill’s Clarmar Estate this summer was cancelled for lack of sufficient registered bidders. Prior to the scheduled auction, the property had been marketed for more than $16 million.

“Auctions don’t create magic”, according to Hodnett, “it’s all about pricing and sellers must be realistic.”

Developers and lenders are turning to auctions to sell inventory, particularly condominiums, sometimes with exceptional results. Witness October’s auction by Boston real estate consultants Accelerated Marketing Partners of the “uber luxury” Natick Nouvelle condominium project, where in two hours all 43 units up for auction were purchased and an additional 12 units were sold as a result of the enthusiasm generated by the auction.

But auctions are not without risks. In the next column we’ll look at what buyers, and sellers, must know to avoid getting whacked when the auction gavel comes down.